As part of our 'Awesome Arts' topic all of the classes in the school enjoyed taking part in a range of different Dance sessions. The children were able to learn how to Dance the 'Macarena', the 'Cha Cha', the 'Jive' and 'Disco'. The photos below show some children in Reception learning the 'Macarena' and the 'Cha Cha'.

The children in Reception had a lot of fun taking part in some Circus skills activities. They did well to do some activities individually and also to support each other in small groups. The children made a good attempt at juggling, balancing along a beam, using a stepper, spinning plates and throwing and catching scarves. Well done everyone for rising to the challenge just like 'Geoffrey the Giraffe'.

All three Year 2 classes enjoyed taking part in an Archery enrichment day. The children learnt the skills needed to fire the arrow correctly. The children's accuracy improved throughout the session! It was great to see how pleased they were with themselves when they hit the Bulls-eye! Well done Year 2!

What a fantastic sports day today! All of the children should be proud of the effort they put in, how they persevered and the sportsmanship they showed. The children enjoyed tackling the obstacle course, attempting to hit the Boccia target, having a lot of fun to try and win the 'tug of war', jumping to the finish line in the sack race, racing to the line in the sprint and keeping a steady hand in the 'egg and spoon race'. Thank you to all of the parents and grandparents who came along to support the children and for creating a positive atmosphere. Well done to the children in the Yellow house who were the overall winners!

The children in Year 1 had the opportunity to learn two new Paralympic sports. A Premier sport coach came into school to teach the children to play 'Boccia' and 'Goal-ball'. These were two sports that the children had not experienced before. They enjoyed learning the specific skills needed to play the sports and they felt excited and proud to improve how they played the sports.

All of the children in Reception, Year 1 and Year 2 had a great time taking part in 'Elite Commando' sessions over two days. The children had to use their teamwork and leadership skills to move their whole team from point A to point B using only six tyres. The most challenging part was that their feet were not allowed to touch the ground. The children showed great teamwork and encouragement to complete the task. Each class also enjoyed toasting marshmallows on an open fire and then eating them! The children were most excited by taking on the challenge of the 'giant inflatable'. All of the children rose to the challenge (just like Geoffrey the Giraffe) to crawl through tunnels, climb a wall, launch down a slide and to manoeuvre under, over and through obstacles!

All three Year 1 classes enjoyed a Fencing session, which was taken by a Premier Sport coach. The children wore a black or white vest with a target, a face mask and used a sabre! (sword) Each child competed against an opponent to see who could strike first to score a point. Fencing was something the children have never done before and all of them learnt the basic skills and had a great time! Take a look at some of the photos. Can you work out which child is behind the face mask?

A Gymnastics coach from Pipers Vale visited us recently. The coach worked with every class and the Nursery children too. The children enjoyed the sessions and learnt different ways to travel along benches, fun warms up to do and different ways of jumping.

The children absolutely loved taking part in an Bhangra Dance workshop today. The children had the opportunity to dress up in Sari's, waistcoats, to use scarves and ankle bells. They were taught a dance routine and were very excited to perform it to music! The children had so much fun! You can see how much they enjoyed it by looking at some of the photos below!

The children enjoyed experiencing some different Olympic events (Javelin, Shot put and standing long jump). They had a lot of fun attempting all three of these events and were brilliant at watching the demonstrations and listening to the instructions. Have a look at some of our photos.

RSW have been experiencing Olympic events - they tried javelin and shot put.

The Year 2s have been having a tennis taster sessions which have been lots of fun. We have learned racquet and ball skills from coaches from Ipswich Sports Club and we can now control our returns.

On Tuesday afternoon the children in all three reception classes all enjoyed taking part in a Tennis taster session. The children were excited to play tennis (some of them for the first time). The tennis coach did some warm up games with the children and then taught them some tennis skills. All of the children really enjoyed themselves! Have a look at some of our photos.

It was very cold (2 degrees!!) and the children put on their coats, hats, scarves and gloves and went out onto the playground to do some archery. All of the children really enjoyed having a go at doing archery, with some of them managing to hit the centre target! By the end of the session a lot of the children were using the bow and arrow independently! Mr Youngs had a go as well and thought it was great!!

The whole school experienced a fantastic day of Dance, led by a Dance teacher. Each class had the opportunity to take part in a different Dance session. Some of the Dances the children got to experience were the 'Jive', 'Cha Cha Cha', 'Rock 'n' Roll' and the 'Macarena'. It was a fantastic day that all of the children really enjoyed! 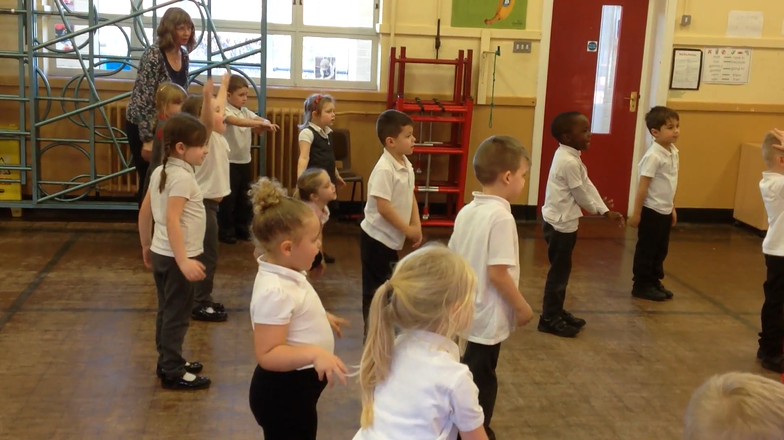 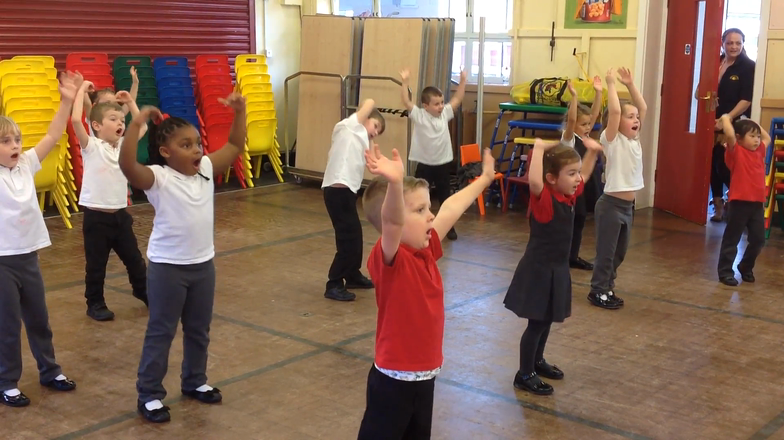